“Worthy of the Crown – King’s Quest Chapter 1: A Knight To Remember Review” by BagoGames. CC2.0

King’s Quest made me feel like a kid again. That sounds great at first, but think back to being a kid for a second. Think about choices you made, things that seemed so important at the time…the games you played over and over again because you had no other options.

That’s the kid King’s Quest awoke inside me.

If you can’t relate to that inner child, then you either grew up in a rich family with guardians that didn’t restrict your games, or you just didn’t play video games. In either case, I just can’t comprehend you.

Graphically the game is similar to The Walking Dead/Borderlands with a dash of Disney design. It looks good, and will certainly age more gracefully than others. The world is very Disney, with goofy characters and childish jokes, and the story is…the story is much like this post…uninspired. I am having such a hard time writing this because I don’t know really what to say about it. You play as a dude who wants to be a knight and must pass a bunch of tests by solving puzzles. It’s great…if you’re a kid who has no other gaming options.

The honest truth is…your character is a douchemiester. You basically cheat your way through every trial…with different varying levels of douchery. I wanted me to fail. I would turn the wrong knob simply to see my smug, feathered, caped self get smashed by a boulder or bed.

I only completed the game because my wife enjoys puzzle adventures and she kept reminding me I have a blog to maintain. Nothing kept me wanting to come back. Nothing in this world brought it to life. Ironically, I would have preferred to continue the iZombie marathon my wife and I were on when this game became free.

You run around picking up random objects and try to use them on things. This becomes infuriating as there is no way to track quests or know what you should be looking for. Much like a toddler taking a stroll through the home while mommy is on the phone, you’re left to pretty much try anything on everything. ‘Maybe I try poking the pumpkin with the fruit picker?’…’Or perhaps I should show my weed whacker to the old lady?’ By the end I was fully prepared to shove my weed whacker into an outlet should that have been an option. At least something would happen.

It’s gone now and all you have left is King’s Quest. Enjoy.

That may be a little harsh, but considering the gameplay in The Walking Dead underwhelmed, this game took underwhelm to subsurface whelmage.

I have no desire to return. I know all the puzzles, I’ve heard all the jokes, and I hate my character. Unless my wife wishes to play through it once since she enjoys puzzle games, I will delete it and forget I ever walked in that knave’s shoes.

Seriously, this character is like watching an old 90’s flick about an adorable brat that gets away with anything and everything. By the end you want to punch him/her back a decade to explode like everything else in the 80’s.

Should you buy it? Let me answer that by asking you…do you like not knowing what you’re doing? Do you enjoy repetitive gameplay? Do you like predictable stories? And finally, can you stand Dennis the Menace?

King’s Quest is still free for PS+ members. Go for it if you want to, but I wouldn’t waste my time if I were you. I served my time so you wouldn’t have to. I know people will think I’m being extremely hard on this game, and I agree, I am. We should have high standards that encourage games to continually improve and grow as technology allows. Games need to break new grounds or perfect current ideas. At least even Destiny was trying something new.

I don’t understand the high rating this game is getting. Have we become so accustom to remakes, sequels, and remasters we don’t expect anything new/better than average anymore? 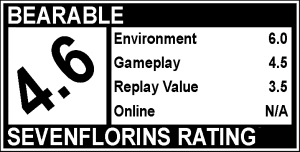