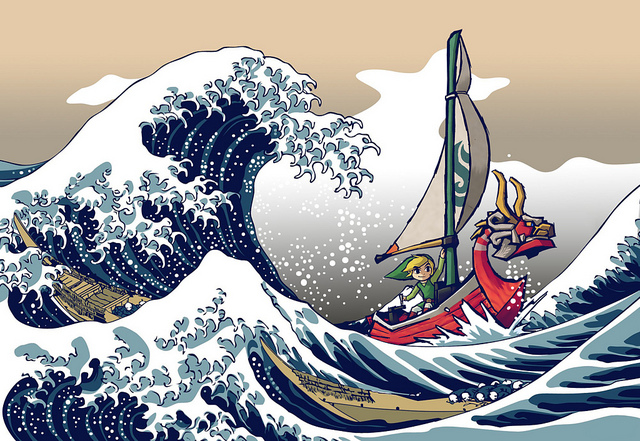 I never played Nintendo. I started on PC, got an Xbox, 360, PS3, and finally, PS4. It’s as if I never had a gamer childhood. My gaming memories revolve around my dad explaining how I would never be allowed to play a video game if I didn’t first learn how to build a computer…or my mother allowing only a few new games a year. If I was going to do this…I couldn’t waste time with games I would outgrow. Console/game choices were made like a parent buying clothes for a child during a growth spurt. One poor choice would result in almost a yearlong drought of metaphorical gaming underwear.

With my wife came the one console she has ever owned (which she won in a raffle). The GameCube. I welcomed it into our family, gave it a place among my own consoles, and, last weekend, I finally played her favorite game.

The Legend of Zelda: The Wind Waker.

You play as a boy, afflicted by mutism, whose sister is kidnapped. That may seem straightforward to most, but it took me a few minutes to wrap my brain around the fact that you are not in fact a girl, dressed as Robin Hood, named Zelda. Despite the ridicule this brought forth from my wife, I still hold to the fact that Link could have been a girl. Nothing about his stature indicates he is wielding a penis.

Link must find his sister alone as his grandmother apparently can’t keep it together in his moment of need. Instead, Grandma places the burden on her disabled grandson to care for her as well as find his sister. Talk about a dysfunctional family. G’ma can cook, though. Boy can she cook. Walter White’s “Blue Sky” ain’t got nothin’ on G’ma’s “Elixir Soup.” That $#!& is 99.1% chemically pure Chuck Norris in a bottle.

There are pirates, murderous pigs, a talking ship, bird people, and a woman who believes giving a child his own private island is a good idea. This game transports you back to thinking like a kid. I had wandered into a small child’s imagination, and was playing his/her occipital lobe rather than a console video game.

Wind Waker was released 13 years ago…the console, 14 years ago. Let’s all keep that in mind. These graphics are different.  Honestly, it stands up to time surprisingly well. Unlike presidential candidate Donald Trump, Wind Waker understands and embraces its visual limitations, creating a style that is attractive and soothing instead of shallow and abrasive…the route some games, and Trump, blunder down in an attempt to compensate.

The music will crawl through your ear canal and plant itself deep inside your brain. Heading to work in the morning, I catch myself humming a song played during long voyages across the map. I can’t even tell if I like it or not anymore…it’s just a fact of life.

Unfortunately, in order to play this game, you must use a GameCube controller. The monstrosity my wife presented me, and I can’t believe I’m about to say this, was more horrific than the original Xbox brick. To make matters worse, the right thumb stick was inverted and no power on earth could change that fact.

But those problems, which caused most of my frustrations, are the GameCube’s, not this specific game’s. Separating those frustrations from the game itself, Wind Waker played exceptionally well, with only two main issues:

1.) Items…there is nothing like the whiplash caused when a game must be paused in the middle of battle or puzzle-solving in order to equip an item you need to use once…then pause and re-equip what you just had.

2.) The targeting system for combat was an abomination. Countless times during the heat of combat I would attempt to target an enemy, only to have Link turn and look at the wall. What Link does not grasp is that enemies are like chlamydia…if you ignore them, they will not go away…they will kick your ovaries/nuts off leaving you barren/sterile and humiliated.

Combat was still fun when the elements came together. Hearing each musical note as your sword slashed an opponent was addicting. Wandering the world, sailing seamlessly from one location to the other was simple and smooth, encouraging more exploration. No loading screens from a game this old is an achievement. The story was paced well, and you could chose when to continue main quests or meander through villages, finding trouble.

And speaking of trouble…let’s talk about pigs. Early in the game I collected three pigs for a neighbor as her pets. I then decided it was time to have bacon. After several stabs and slashes that should have carved up some pork tenderloins, the pigs trapped me in a corner and ate me…Hannibal style.

But in this case, there is replay value. For a game so old, it has decent length, and I certainly didn’t do everything I could have done. In fact, I’m hoping that some week this winter, we can once again lock ourselves in our home and tag team through it while sitting under blankets, drinking hot cocoa (peppermint schnapps required). Wind Waker holds a charm that is hard to explain. Like popping bubble wrap. You know it’s childish, and you can’t necessarily explain why you’re doing it…you just want more.

…It’s on a GameCube…

While it will never become a treasured favorite of mine…I believe it would have been had I played it when I was younger. But let’s see…December 2002 I was deep in Jedi Knight II: Jedi Outcast on my first and last home-built PC. Unknown to me, five miles away, on the other side of the highway, my wife was making childhood memories with Wind Waker.

Wind Waker made me wish I hadn’t tried to become a gaming adult so fast. It gave me a little glimpse of the gaming boyhood I missed, and while the experience is not perfect, it fills a gap that seems to be growing ever prominent in contemporary gaming as Nintendo seems to have lost its identity. While I was never in the Nintendo crowd, I miss its presence.

A word of warning…if you do not like puzzle games where the solution is found by blundering around for hours until you happen to hit the right thing or use the correct item, this game will give you PTSD. I was spared much blundering because I had watched my wife play as well as had her aid in a few dark moments of hopelessness. Keep that in mind if you are going to give this game a try.

Tingle is a price gouging turd.

This review is thanks to my wife and I locking ourselves in our home for the weekend…with stipulations written on an old Best Western notepad…see below. To any gaming couples out there, I strongly recommend these spontaneous events.

84 thoughts on “Casual Reviews – The Legend of Zelda: The Wind Waker”